"Eugenia" worn another way
Originally uploaded by I Will Fly design
Aw, man. So I've been working on this vest for a month...
Not just the sewing of the vest, though. I also had to design the pattern and work through a test garment to tweak it first. I know, I always seem to be doing that. But then I have a perfect pattern I can use to make a million things with, right? If only it worked out that way! I just get bored with doing the same thing all time.
Anyhow. Here is a vest that I have dubbed "Eugenia". I was going to call it "Eugene" after my favorite Andrew Bird song, but thought slightly better of it at the last moment. Slightly.
The inspiration for this vest came from the fabulous draped styles of one of the premier art deco designers of the 1920s, Erte. These days you mostly see his illustrations of theatrical costumes and other elaborate formal attire, but he also deigned lovely draped day wear with fascinating interlocked and wrap-around pieces.
The fabric I used here is 100% wool and 100% cotton. I have moved away from synthetics whenever possible, these days. Natural fibers are more comfortable to wear, as you probably already know, but they are also better to work with. You can mold a piece of wool in ways that polyester would never allow, and silk drapes in such beautiful ways that synthetics will never quite replicate.
The edges of the front panels, here, were all stitched by hand and took eons to complete. I am quite happy with the way it worked out, though! Originally I was going to make the buttons functional and space them out down the front in a normal sort of way. I was inspired along the way, though, by one of those happy accidents, and instead settled on decorative buttons and a snap-front closure. I use snaps on most of my shirts, rather than buttons, because I like the hidden quality of them as well as the fact that you can't mess up an otherwise perfect garment by sewing a snap on the way you can by sewing a buttonhole on a dicky machine.
Posted by I Will Fly at 9:34 PM No comments: 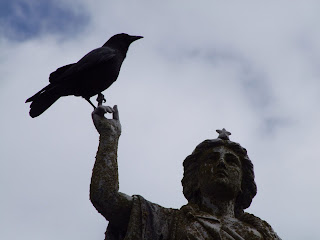 Right now I am suffering from a surplus of ideas and a distinct lack of time to devote to them (as well as a massive lack of energy). At present I have at least three massive projects I want to work on ALL AT ONCE, not including the complicated and fiddly project I have been working on for a month now!
I'm currently about 3/4 of the way through a (hopefully) gorgeous 1920's-esque, Erté-inspired vest. After that I have to decide between a retro 80's dress called "Jailhouse Rock", a steampunk-y bit of Rosie-the-Riveter-chic, a corset with a fun and funky twist inspired by a local art festival, and many experimental bits and bobs of varying degrees of usefulness.
BUT In a few months, I will have more than enough time on my hands. Which is by way of saying that at the start of September I shall be joining the ranks of America's unemployed. I hasten to add that this was a decision I made for myself, after a lot of hemming and hawing and generally beating myself up about it. So, in a week I will be ending my 5+ year association with my retail job and taking on full-time work at the theater for the Summer season. After load-out at the end of August I will be pleasantly free to do with my time what I choose until I either a)get bored and have to find a new day job, b)become broke enough that I have to find a new day job, or c)start making enough money with my Etsy shop and craft shows that I no longer need a day job.
Regardless of what happens it means I will have practically no time for the next few months, and then, finally, PLENTY of time to work on new designs and get the store restocked with interesting and fabulous new things!
So, anyway! Wish me luck!
Also, in honor of the occasion, for the next two weeks use the coupon code "QUITTINGTIME" at checkout and get 10% off everything in both of my Etsy shops!)
iwillfly.etsy.com
iwillflydestash.etsy.com
Posted by I Will Fly at 9:23 PM 1 comment: