So, through Pinterest I recently discovered that I like Alexander McQueen. Now, of course a designer should be looking at and admiring/learning from other designer's work, but to be honest the whole "fashion week" culture bores and annoys me. Clothes that are impractical paraded around on women who are too skinny wearing hats that are Too Much? No thanks. And when I think McQueen I always think of this: 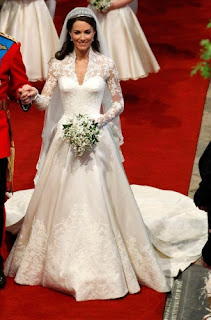 The Duchess of Cambridge's wedding dress. Which is pretty enough. I was deeply relieved when I first saw it. I am not a fan of the bow thing on the butt or the strange placement of the lace on the bodice (it sort of centers around her boobs, not the way I would have done it but whatever), but it's pretty okay. 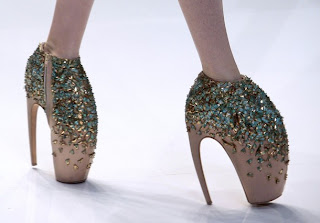 What are these, hooves? Who wears these? I mean besides Lady Gaga. Anyone? No. Because they are STUPID. I'll tell you what they are, they are an even dumber looking fashionable version of "ballet heels" which are A) not supposed to be worn outside the boudoir and B) also stupid looking. Hand to god, when I was looking for a photo of these shoes all I had to type in to Google was "Alexander McQueen crazy shoes"

Anyway, so my idea of what Alexander McQueen stood for hasn't really been anything that excited me.
But, Pinterest led me to many many fashion blogs. And from there it was pretty much all over. So, without further ado here is what I have learned about Alexander McQueen, which has sort of blown me away: 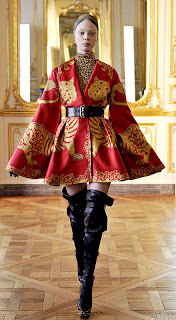 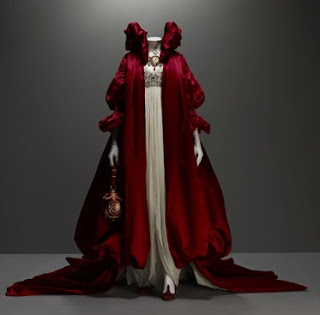 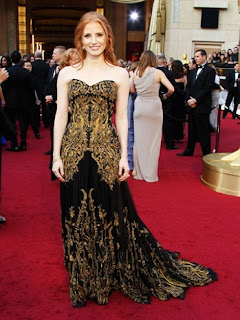 On Jessia Chastain (who I assume is an actress because I have little
to no grip on popular culture) at the Oscars. Oooh! Aaah! 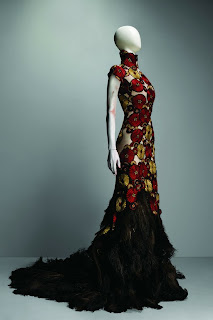 Here. Have another pretty thing. 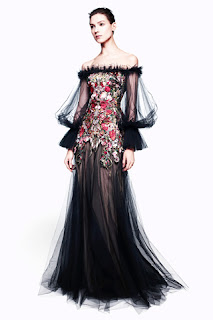 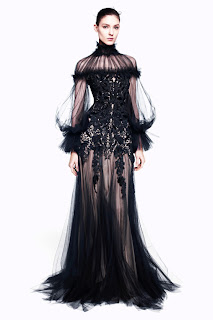 But these are my favorites.
I love the sleeves! La-dee-doo
Posted by I Will Fly at 8:33 PM No comments:

I'm not sure why, but lately I have been craving gentle and soothing projects (no, I tell a lie. I *do* know why. Because life has been CRAZY.) so I have been spending a little time finishing up old projects and working on small projects for the destash shop. Small, self-contained projects, like dolls, knitting, and hand embroidery, are a nice little break from regular garment-sewing. You don't have to work with large quantities of any of the materials involved, and they can be fit in around the other things happening in life.
I am no great embroidery expert, but here are two embroidered panels I recently listed in my destash shop. They are framed in janky old picture frames that we bought at an antiques fair a couple of years ago and repainted. 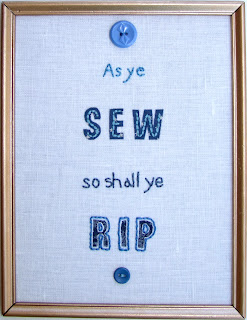 This is as close as you can get to a family sewing motto. It is
based on the sign my great grandmother kept
above her own sewing area. 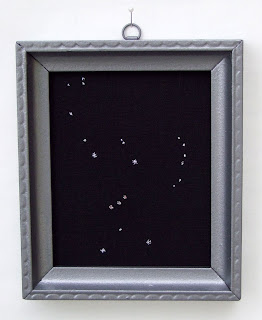 This one is my favorite constellation (what, doesn't everyone have
a favorite constellation?), Orion, of course. Complete with
his "knee" (or dong, depending on your viewpoint) nebula.
See, I always thought he looked like he was doing
a little crazy dance with one knee all bent and both arms out,
right?
...
Right?

Sometimes a project just sort of bogs down. I usually manage to pick it back up again after a brief pause and power through it, but there have been a few that just sort of... sit around... for a long time. A really long time. Like, years. Seriously. After a couple of years on the shelf I just kind of get annoyed with them and tired of having them in my life. It's often projects that were a lot more expensive and involved than I was hoping.
Take, for example, two projects that I recently finished (for no good reason, I just got an urge to see them done and gone, and I was searching for things to work on that wouldn't require too much thinking).
Example A)
Duchess Grey chemise top in ivory lace and pearls: 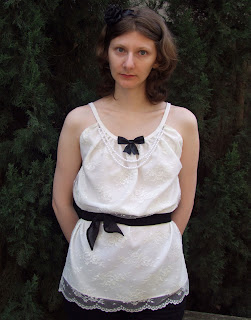 This project, according to my receipts, was started two whole years ago. Most of the work was done. I had designed a way to add the pearl chains that would allow for easy cleaning and storage and had them strung and ready to go. The body of the top was done. I just needed to attach the layers at the underarms and then add the straps and bow. I bogged down on this for some reason and it sat it a bag waiting for me, making me feel guilty whenever I ran across it. Especially because the materials involved here were stupidly expensive. I finally got back around to it and finished it up quickly enough that I wonder what the heck took me so long. 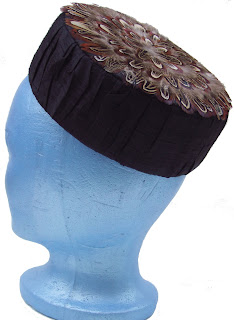 This one sat incomplete for no less than three full years. I wanted to make a pillbox hat for a long time. But, you see, the problem is that millinery supplies are not that easy to come by these days. And I couldn't find anyone (or any references) that could explain the process of hat-making to me. So I had to reinvent the wheel. I designed and built this entire thing from scratch. I got the base and top completely built and covered in the silk dupioni before I bogged down on this one. The lining was half-way attached, as well. All that was left was adding a tiny detail to the lining, stitching it in to the hat, adding loops for bobby pins, attaching the top to the body, and gluing down the feathers. That sounds like a lot of work but it was only a day or two worth of effort, in reality. All the hard stuff was already done.
There are no excuses for how long I let this sit around. I think I just fall out of love with things, and the longer I work on them the less I am interested in them. Also, the more closely involved in them I am the worse and more insurmountable the entire thing seems.

ANYWAY! TA-DA! I finished two things that I thought would never get the heck out of my sewing room! YYAAAAYYYYY ME!