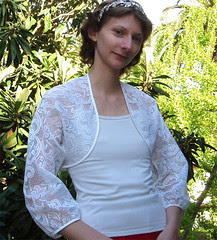 Grace lace shrug
Originally uploaded by I Will Fly design
Having sold two things this week, both of which were actual garments (!!) and one of which was my custom-fit sailboat blouse, I am pretty excited.
Today I listed yet another bridal item, this time a pretty lace shrug. Honestly, I have been wanting to make a design like this for quite some time, not really realizing that it was wedding-appropriate. I guess that shows what sort of fashion sense I've got!
I even busted out the headpiece from my wedding for the pictures, check it out!
I think I deserve some sort of celebration... a glass of wine with dinner tonight? A batch of cupcakes? So many choices...
Posted by I Will Fly at 3:00 PM No comments: 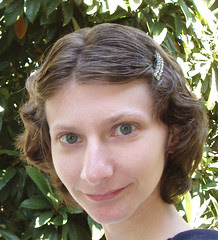 Chloe hair clips
Originally uploaded by I Will Fly design
Etsy has been running it's wedding series, and I've decided to try listing a few things in the Weddings category to see how things are looking over there these days. This first item is a bit of an experiment.

My Great-Nana was something of a bling bling fan, though of course she thought she was being terribly elegant and continental about it. Rhinestones were in, okay? I had a few of her rhinestone pieces that I was given as a child. A fabulous brooch of green and clear stones that was snow-flake shaped that I wore on my coat lapel until one of the big green stones dropped out (I was devastated! They are, of course, a size/shape/color that Swarovski no longer makes), a pair (though I seem to only have one now) of clip-on earrings that I wore as a necklace pendant on my wedding day, and this long crazy strip of rhinestone trim. It's three stones wide, held together with quickly deteriorating string, and has no easily detectable use or purpose. It's just a strip of stones. I have always loved it, though not known what on Earth to do with it.
I bought myself a pack of hair clippies, which just happened to come in a pack of 4. I was looking at the fabric store I work at for some trim to use on them when I realized that the EXACT SAME TRIM was already at home waiting for me, just slightly aged and mellowed with the years, in my old junk jewelry tin!
So here we are, a set for me and a set for Etsy... and a bunch of trim left over for playing with and making more projects.
Posted by I Will Fly at 3:01 PM No comments:

Don't you hate it when people say that to you?
Anyway.
Yep, I'm right in the midst of several projects. I started yet another bridal item tonight after work (a shrug). I am working on finishing up the bridal corset obi that I started several years ago, but realized that it's working out to be another one of those endless projects that keeps having just ONE MORE THING to deal with. So I had to put it aside for an instant-gratification project.
In other news the store's been in a bit of a March slump, which has me realizing why big retail stores always have March Madness sales this time of year. I've also been very very ill for the last two weeks, and am just pulling out of my latest stomach flu as we speak (or as I type, I suppose). So there isn't much new and exciting to report.
Anyhow, new items on the way, next week at the earliest (depending on how much sun I've got after work, for picture taking purposes).
Happy Spring-type holidays to you all!
Posted by I Will Fly at 11:52 PM No comments: 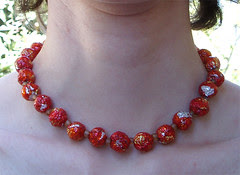 candy pearls
Originally uploaded by I Will Fly design
Sometimes I just like making stuff that isn't for the shop. This is my latest project, made from two dozen individual chocolate covered cherry wrappers rolled into "pearls" and varnished.
I'm particularly fond of short strands of pearls, and was looking for something fun and different.
Thanks to my husband for eating all those chocolates for me! (nope, I didn't eat any of them, I don't like cherries).
Posted by I Will Fly at 3:02 PM No comments:

Another of my items was featured on a Storque treasury on Etsy! This one even had a nice little blurb about it and an enlarged picture. Check it out!
here it is!

They are running a series on weddings there, currently, so I was sort of hoping something like this would happen.
Oddly enough I am working on two more wedding items right now. A corset and a corset obi, both of which I haven't worked on all week due to extreme illness. Anyhow, it's nice to see Etsy paying more attention to their wedding category. I am always a little afraid of posting items there, fearing they will disappear into obscurity.
Posted by I Will Fly at 12:57 PM No comments:

The project that wouldn't end 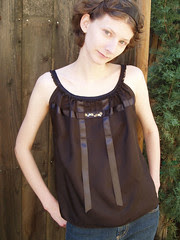 Musee chemise top
Originally uploaded by I Will Fly design
That's right folks, the project that I started ages ago and have been complaining about ever since is finally finished!
This started life as a piece of ivory Ambiance that was left over from my sister's wedding dress that I wanted to make into a chemise style top. I had the brilliant idea of dying it black and making a sort of gothic lolita type look with a black satin binding and a white ruffle.
At various points along the way I had to re-imagine entire swathes of design, as each step I took created a problem that then had to be solved creatively, not the least of which was that the black dye actually turned the fabric BROWN.
Anyway, it's done now.
At least... I hope it is?
Posted by I Will Fly at 10:49 PM 1 comment:

everything old is new again 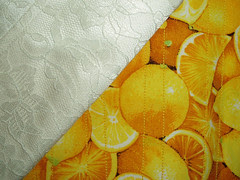 everything old is new again
Originally uploaded by I Will Fly design
I am near the end (hah hah! there is NO END) of a project that just seems to be going on forever. So I was searching around in my head for something ELSE to work on for a while.
The husband and I went to a concert last weekend featuring Lemony Snicket on accordion, and that reminded me of a corset I had started something like three years ago that is covered in this fabulous lemon printed fabric. So I went searching for it and while I was digging through tupperware containers full of fabric and such I came across my second corset obi, which is almost finished, actually, a cream silk covered in ivory lace. Both of these projects just need bindings and grommets and embellishments and such. I started them both at about the same time and just never got around to finishing them because the binding was very picky on both of them.
Anyhow, I am posting them here to remind myself to get these done, now. I think it's about time!
Posted by I Will Fly at 6:47 PM No comments:

I now pronounce you... 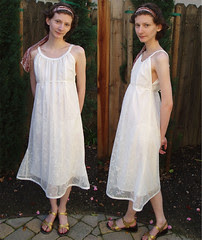 wedding dress "Jenny"
Originally uploaded by I Will Fly design
You know how with every dude (or potential dude) you get (or potentially get) you have a totally different concept of the perfect wedding? Or maybe it was just me.
Anyway, for one dude I had this idea that the perfect wedding would be sort of an anti-wedding. The beach ceremony would be performed by an Elvis impersonator (in sparkly white jumpsuit, natch) who would pronounce us man and wife and then maybe strike a pose, lip curled and hips thrust, disco finger outstretched in a move that would make John Travolta green with envy. The music would be provided by a mariachi band, who would bust out once in a while with a classically anti-love song. If we could prevent the food from getting filled with sand (my mom and step dad were married on the beach, and it was a huge fiasco trying to keep the sand out of the food) there would be chocolate dipped strawberries, lobster, and fondue. Basically the most impossible to consume foods imaginable. He'd be in casual, possibly plaid. I'd be in a tea-length pink eyelet dress.
Well, that dude didn't pan out, and I ended up marrying a much nicer dude while dressed in crimson in a ceremony which didn't involve Elvis, mariachi, or sand, but this dress reminds me of that "perfect" little anti-wedding I envisioned once upon a time.
*sigh* oh, the possibilities...

This dress also started life as a much longer gown. I showed it, but the model that was going to wear it was switched into another outfit at the last minute, leaving this poor dress on a much smaller, shorter girl, whom it hadn't been hemmed for. It just dragged on the ground a lot. I was terribly... well, not upset, at that point in the game I was merely resigned to whatever fate it was destined for. After the show I had it dry cleaned, and then chopped off the entire bottom of the gown, including the perfectly aligned train I had so carefully executed, and re-hemmed it to a one-size-fits-all tea-length. I have to say, with Spring quickly approaching, that I am happier with it this way than I would have been reworking the entire bottom half of the dress to salvage it from runway marks. As a side note, this dress involved so much more hand work than I had anticipated, from sewing the gores into the hem to attaching the piping and binding at the top, so many hours of hand stitching went into this that even I was surprised. It's going to be posted for sale in my Etsy store on Monday, so wish it luck. It would really love to be a sweet sun dress or someone's beloved bridal ensemble.
It wouldn't mind the Church of Elvis one bit.
Posted by I Will Fly at 4:49 PM 2 comments: