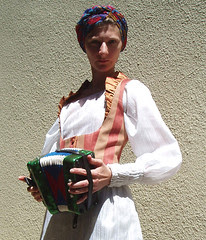 Madame Adora underbust vest
Originally uploaded by I Will Fly design
For a while now I have been pondering the "circus" aesthetic. This is a subset of... some variety of dress-up fashion. Anyhow. I have long been intrigued by all things carnival related and circus inspired, so it was a natural fit.
The only problem was, I couldn't figure out WHAT it was. The style. What it was supposed to be embracing. I looked at a lot of artwork and even some other people's fashions that were supposedly "circus" themed, and all I got was a sense that no one was agreeing on the look they were trying to achieve. I saw a lot of stark black/white combos that looked basically "gothic" or "lolita" like. I saw a lot of brightly colored things with neon flashes and striped hoo-has. After a lot of searching it seemed as though "circus" was basically just "steampunk" but with more color.
Well, not one to follow anyone else's ideas of what's what this is what I eventually decided to make. It's my nod to the carnies and ringmasters of the good old days. I would like you to imagine me standing in front of a yellow gypsy caravan while I play my mini accordion here. I would also like you to imagine that, instead of the tuneless honking that I illicited from said musical instrument, that I was instead wailing away on something more like this:
http://www.youtube.com/watch?v=oHYvhuPTzTE
Posted by I Will Fly at 3:31 PM No comments: