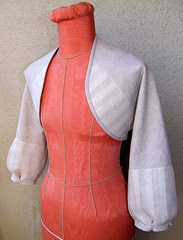 Summer in the City shrug
Originally uploaded by I Will Fly design
Sometimes there is just no winning with a project. Sigh...
Some time in the past year I sketched out this design for a shrug, made in natural speckled grey linen with off-white silk organza overlays. I couldn't find the linen that I wanted for a while, but eventually it turned up in my favorite local fabric store and that's when the real fun started.
Originally I had planned to gather the sleeves in to the binding at the cuff in the regular way. But after I was already halfway there I realized that gathering it would make it completely impossible to iron the pleated overlays when it was washed, or after taking it out of storage. I really don't like to send designs out in to the world that are not going to last or that can't be cared for. So then I had to rethink and re-engineer the whole silly thing.
Eventually I thought of the idea I used here, which is to gather the cuffs in to shape with a series of loops and buttons that could be released and rebuttoned as required.
With the thinking out of the way the construction then entered in to a series of small but nearly fatal catastrophes. After two weeks or so I am happy to announce that it is finally done... and that I never want to see it again in my life, thankyouverymuch.
Posted by I Will Fly at 5:56 PM